The City of West Monroe was recently recognized by the Louisiana Municipal Association as a winner in the annual Community Achievement Awards for the City’s efforts to revitalize Downtown West Monroe.

West Monroe was presented with the award at the LMA Annual Convention recently held in Baton Rouge. The Community Achievement Awards recognize the achievements of municipalities over the past year in four main categories – Community Development, Economic Development, Basic Services and Technology and Connectivity.

The City of West Monroe received the LMA Community Achievement Award in the category of Community Development for cities with a population between 10,000 and 25,000. The Community Development award recognizes outstanding achievements during the 2020 calendar year in public transportation, citizen participation, public buildings, main street improvements, development plans, beautification and others.

The City of West Monroe adopted a vacant property ordinance for those properties in Downtown West Monroe that are not in use. West Monroe became the first Louisiana municipality to adopt such an ordinance. Since the ordinance was put into place, 19 vacant properties have either changed ownership, are under construction or have been put back into commerce with tenants.

Since revitalization efforts began, several new businesses have moved to the downtown area. The district now has more than 70 businesses including boutiques, specialty shops, spas and salons and food and drink venues.

There are plans for continued growth and progress to be made in Downtown West Monroe that include large-scale infrastructure improvement projects to the streetscape such as underground utilities, new sidewalks and crosswalks and bicycle lanes. Plans are also being developed for public access to the Ouachita River for recreational usage such as kayaking and canoeing.

For more information about Downtown West Monroe, contact Main Street Director Adrienne LaFrance-Wells at (318) 396-2600 or alafrance@westmonroe.la.gov. Updates about the downtown area can be found at www.facebook.com/downtownwmrg 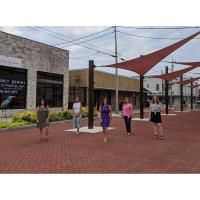