The National Association of Social Workers, Louisiana Chapter (NASW-LA) has named Pamela Saulsberry, Ph.D., the Social Worker of the Year.

Professor Saulsberry serves as Executive Director of the Office of Diversity, Equity and Inclusion at the University of Louisiana Monroe. She will receive the award at the NASW-LA Conference in June.

NASW-LA Executive Director Ayn Stehr said the committee's decision was unanimous, calling Saulsberry "a model for other social workers and students" who has "contributed positively to the profession in a meaningful and lasting way."

"Of all the awards I have been blessed to receive, this one means the most," Saulsberry said, adding that she chose to become a social worker as an 18-year-old college freshman.

Saulsberry said the six core values of the profession, especially service, social justice, and respect for the dignity and worth of persons, resonated with her then and continues to this day.

"Social work is a calling, and I have never regretted answering that call," she said.

The award is given annually to the candidate who exemplifies the best of the profession's values and achievements through specific accomplishments.

Candidates for the award must meet stringent criteria, among them, having made a demonstrable difference in advocating for clients, impacting social policy, and demonstrating outstanding leadership.

Among her numerous other awards are the ULM Foundation Award of Excellence, the Association of Black Social Workers' Regional Humanitarian of the Year, and the CAMEO Award for Outstanding Leadership in Education for March of Dimes.

"Dr. Saulsberry is an outstanding clinician, a brilliant teacher, and a tireless mentor, who has literally trained generations of students to the highest academic and ethical standards," said William McCown. Ph.D., professor, and Interim Director and Program Coordinator of the School of Behavioral and Social Sciences.

"Her sense of fairness, creativity, commitment, and compassion are known throughout the campus, the community, and the state," he concluded. 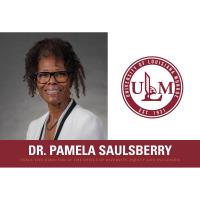